Energy trade between the three Russian regions takes place in the same way as for the other model countries, i.e. only neighbouring countries can trade directly. The consumption nodes are the same for all traded goods (biomass, electricity and natural gas), and in addition there are production nodes for natural gas. These are situated based on actual production today for RU1 and RU2, and at the largest potential natural gas field for RU3. For RU1 and RU2 this means that the distance from the production nodes to the consumption nodes corresponds well with today's pipeline structure. RU3 is more problematic due to the vast distances. The production of natural gas that takes place in RU3 today is situated in the Far East on the eastern coast at Sakhalin. The gas extracted here is mainly exported as LNG so is not modelled directly in the current version of the model. The connection between the production node in RU2 and the consumption node in RU3 reflects existing pipeline structures that supplies the population centre in RU3 today. RU3s production node is situated in Eastern-Siberia by the undeveloped gas field Kovytka. 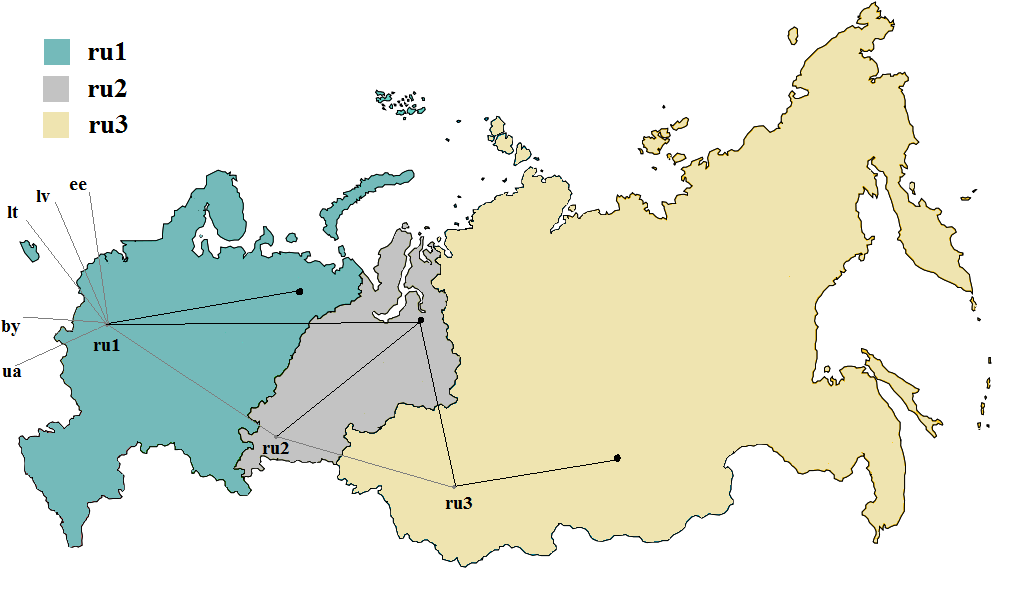 It has not been possible to find data on the actual natural gas trade between the Russian regions. Due to this own assumptions have been made regarding the internal natural gas flows in the base year. In 2009 88% of the Russian gas extraction took place in the Yamal-Nenets region, which is situated in RU2 in the model. From Yamal-Nenets the natural gas pipelines generally go westward or southwest. Due to the way the regions are constructed this means that most of the gas that is extracted in Yamal-Nenets is transported from RU2 into RU1, which covers the western parts of Russia. It is therefore assumed that the gas extracted in RU2, minus the gas consumed in the region, is exported to RU1. IEA Natural Gas Statistics gives information about the trade flows from Russia (national figures) to Europe and the rest of the world. It is assumed that all the gas that is imported to Europe from Russia goes through RU1, as this is consistent with the pipeline structure towards Europe. Russia also has some export of natural gas to the rest of the world. Figure 6 shows how gas can be traded directly from the production node in RU2 (where the majority of the Russian gas is extracted) and the consumption nodes in RU1 and RU3. This is based on where the actual pipelines are situated. RU3 has some export of LNG from the Sakhalin field in the Far East. It is assumed that this is traded directly with ROW (rest of the world).

ENTSOG has capacities for the export pipelines that run from Russia into Europe. Combining these sources with more detailed maps of the Russian gas pipeline network (EEGA,[1] Petroleum Economist 2011), and an overview of existing infrastructure  from Nies (2011), a set of capacities between the three Russian regions have been created. The capacity between RU2 and RU1 is assumed to be larger than the export capacity as the pipelines are also used for domestic transport of gas. Based on the pipeline maps some capacity is added between RU2 and RU3 (from Surgut and Tyumen into Western Siberia). It is also assumed that RU3 has some capacity towards the rest of the world (row), although this is currently only from the gas fields in the eastern parts of the Far East. This is based on data from ENTSOG.

The Federal Tariff Service provides a set of regulated tariffs that the distributors pay Gazprom for the gas in all the 83 regions (see Prices and Taxes). These prices vary with the proximity of the regions to the gas fields. When a tariff is calculated based on the difference in the price to industry between the regions closest to the gas field (Yamal-Nenets Autonomous District) and regions close to where the pipeline passes on its way to the border to Ukraine, the cost per toe/100 km is very close to that found based on WEO (2009) data used for international transportation of gas. Based on this it is assumed that the same transportation costs apply between the Russian regions as for the rest of the model countries.

Electricity trade takes place between the consumption nodes and SO (2011) provides information about the trade flows for the seven federal districts. This data has been aggregated to fit the LIBEMOD-regions. There is a slight inconsistency between how the regional power systems are set up and the federal districts. In the base year the flows have been adjusted between the regions to ensure consistency within each region.

Abdurofikov (2009) provides transmission capacities between 28 electricity zones within Russia. These zones do not correspond completely to the federal districts, as there is one zone which is made up of parts of the Ural Federal District (RU1) and parts of Volga Federal District (RU2). This whole zone has been included in RU1.

To find the operating and maintenance costs of electricity transmission between the regions exactly the same approach as for the other model countries has been used.

For biomass there is assumed no trade in the base year. This is due to lack of data on regional biomass trade and the low level of produced biomass in Russia in 2009. RU1 trades with the European countries in the same way as Russia does when it is an exogenous country.

The same international transportation costs apply as for the other model countries.